A treat for players and fans of 15mm scale science fiction wargaming now as we present the painting and converting work of Mastergunz on our HOF range battlesuits.  Variants of the BearCat which works alongside Security Force Alpha.  If you would like to see all of these and other mecha in the range go HERE. 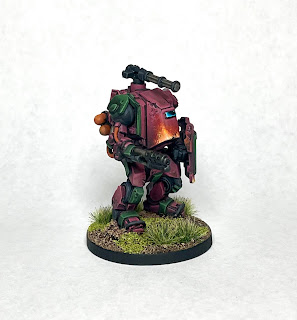 We begin with a conversion and paint up of the HOF121A FireCat Battlesuit.  The clear glass of the cockpit was plated in armour and then a vision plate worked in for the pilot.  Lovely stuff!  Here is is from all angles.  The work was done with plasti-card smoothed down and fitted. 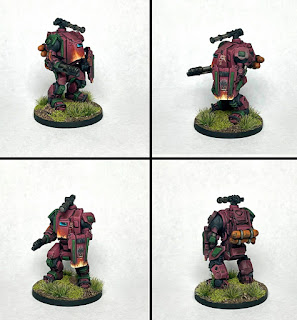 There are six (seven if you count the Meerkat Spotter Suit) variants of the BearCat each with its own role. General Use, Anti-Armour, Fire Support, Construction and Artillery. Mastergunz last time painted up two of HOF121 making use of the parts supplied to create his own battlesuit load outs. 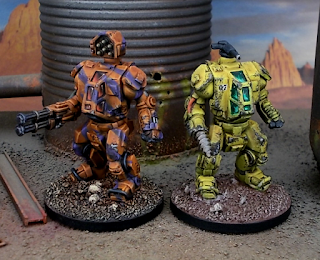 Double Chaingun and Missile Pod on the left and Power Drill with machine gun on the right.  The original BearCat comes with everything shown above plus a chainsaw. 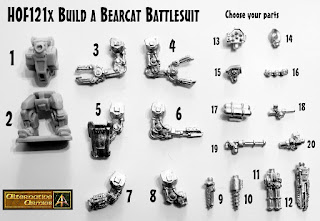 In response to gamers requests we released the BearCat Parts Selector page so that you can build your own battlesuit from twenty choices in any quantity.  Go HERE for this.

The HOF Range has more than one hundred and sixty codes suitable for any game system and we look forward to seeing what Mastergunz chooses next to add to his collection.