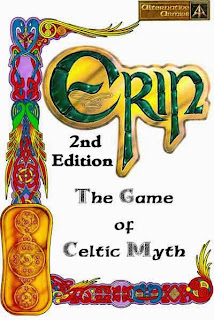 From the very dawn of time, the land existed. Invaded, colonised, deserted, invaded once more, and always fighting against the darkness that dwelt in the Northern Seas. The land was rich with Magic, a place for Heroes, Gods and Monsters. This land has been and shall always be Erin.

'Now sit you down and listen for this tale will fascinate and confound you in equal measure, for what I speak of is no longer vivid life in this world of men....' 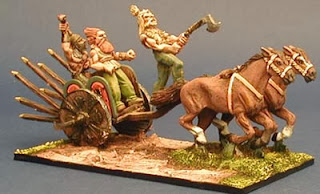 Erin is a Wargame based on the 'Invasion Cycle' of Celtic Ireland. It is designed to be used with Alternative Armies range of Celtic Mythology Miniatures, all of these intended to portray the feel of accurate Celtic Mythology. Ancient Magics, old Gods and Monsters from the mists of time are common in the land of Erin as well as mere men and women.

Erin allows you to take the role of a Hero of ancient Myth and to lead the Warband that you assemble through Legends of triumph, glory and tragedy. Your Hero and Warband may be Milesian, Sidhe, Fomorian, Firbolg or Nemedian. No matter who or what you are the goal is the same: to live eternally in Song and in Legend.

In its second edition, Erin adds much to its roots, building on its simple yet elegant rules system and the Mythology that surrounds the Invasion Cycle of Ireland and Gods and Monsters of one of the world's most important Mythologies gains a greater depth of play.

The main features of the Erin Rulebook are 'The Land of Erin - The Invasion Cycle narrative', the rules of battle, array of war (expansion rules for cavalry, chariots), Terrain, Warband and Hero creation, the peoples of Erin, Gods and Monsters, Mythical Warriors along with core scenarios, scenario creation and pre-made Warband sheets. 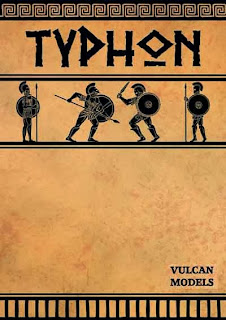 'Challenger of Zeus, most vast and terrifying of monsters, the sinew of coiled snakes and venom: a bringer of horrifying battle and despair. The spreader of deceit and bane of all the Gods of Greece and beyond' - Typhon, King of Evil. 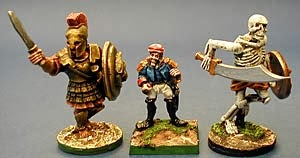 A 'Heroic Scale' game with 50mm scale miniatures, re-create the battles of Greek Myth and wage your own quest to become a Hero of the stamp of Hercules. True to the actual myths and warriors of Greece. 'Heroic Scale' miniatures stand are much larger than our 28mm figures (centre Flintloque miniature) as this image illustrates, allowing you to skirmish in a much more imposing scale. 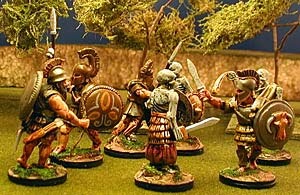 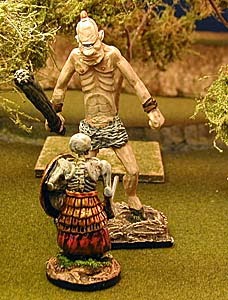 In the 'Before Time', all was Chaos and Darkness nothing had the form of existence or a place to dwell. Mother Earth burst from this Chaos and sprang forth with lush grass and blue waters from the soil and cliffs of a New World, the universe was born and grown. Along with the simple beasts and the birds of the air were her first children, the hundred -handed ones. After these Giants came the master builders, the Cyclops of a Single-Eye, builders of massive walls and binders of the lands. Banished to far away from Thrace, some to Tartarus they dwell still, or so say their decendents still of the One-Eyes. Titans came from the earth bound by the hammering of the One-Eyes and admired and then feared by the Gods who now came to the world. These Titans fought the Gods and were destroyed by Zeus, Father of the Gods of Olympus and son of Cronus who tried to kill his son. Mother Earth assisted Zeus and used the hundred-handed ones to destroy Cronus and the Titans. Being mightier than the Titans the hundred-handed ones hold them prisoner beyond view and under locks.

The Gods of Olympus through Zeus were now the sky above and though the ravaged land grew once more it was empty of divine works. From Serpent's teeth, the hands of Prometheus and the richest fruits of Mother Earth came the First Men. These men were golden creatures, eaters of honey, dancers and immortal though they perished and passed peacefully when Cronus went from the World. Then were the Sliver Race of Men, like The Golden they were divinely created but they lacked drive and did not worship the Gods though they never warred with each other. Zeus killed them all for this idleness and brought about third the Brazen Men who were evil and were seized all by Black Death.

The Fourth Race of Men is the time of Legend, frail and brazen but begotten by mortal mothers they fight gloriously. They blazed at the Siege of Thebes, battled at Troy and with the Trojans, sent far voyages such as that of the Argonauts and fair Odysseus. Battling monsters and each other they will all end in Elysian Fields, but not here and not now. Now is the time of Heroes. The time of Olympus and the time for creating Legend: your time.

In the Typhon rulebook you will find the times of fable background, full rules for playing the game, creating your Hero his Sacred Band and the foes he must fight, the primary gods of Olympus and their powers, making your own 'myth' or small campaign, the array of battle and monsters (extra rules) along with the core scenarios and several pre-made play sheets.