Ogre Cavalry and Gunners back at Alternative Armies

All of the Hunvarian Legion and Krautian Giant Legion Ogres for use in Flintloque and Slaughterloo which use riding and limber Rhinos are now back on the Alternative Armies website. As we announced a week or so ago we were going to replace the 28mm scale white metal beasts used in Ogre cavalry and artillery crews with resin ones. We have done this and with this new production medium all of the codes are back online now with a 20% reduction in price.

Here are the codes containing the resin Rhino's. Pricing new and old is shown on the website. Enjoy!

The contents of each code are not affected in terms of the number of miniatures and their poses and all other parts aside from the Rhino's remain in white metal as before. Thank you for your support. We will be moving onto other mounts in resin soon.  You can also purchase the Rhino's on their own too if you go HERE.

Following up on new resin versions of the Trolka and their huge Moose mounts Alternative Armies is about to replace the 28mm scale white metal mounts for Ogres in the games of Flintloque and Slaughterloo with resin versions.  Test castings have come out well as you can see above with the riding Rhino and the limber Rhino as used by the Ogres of the K.G.L (Krautian Giant Legion) and the Ogres of the Hunvarian Legion.

We have removed temporarily all of the codes on the website which make use of Rhino mounts while we are making changes and bringing a group of silicon molds on stream to produce the miniatures. Riders will of course remain white metal and here is a list of the codes to which the change will be made:

More information soon and we hope not to have these codes offline for too long.  If you have any questions or comments please email me directly (enquiries@alternative-armies.com) or comment below.

Timmy over at Wargame News and Terrain blog has put up an interesting short article comparing the new monsters in the HOT range from 15mm.co.uk to 28mm miniatures from Alternative Armies. 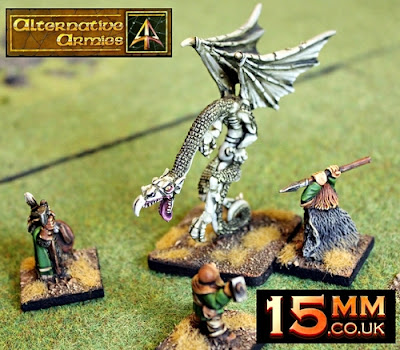 This was as a result of several wargamers stating that the HOT100 Ghoul Dragon and the HOT94 Jabberwock looked perfect for use in a 28mm scale setting despite being made for 15mm scale Fantasy wargaming. I was happy to send Timmy some size comparison pictures which he has used to good effect. Go HERE to read more and to see all the pictures. 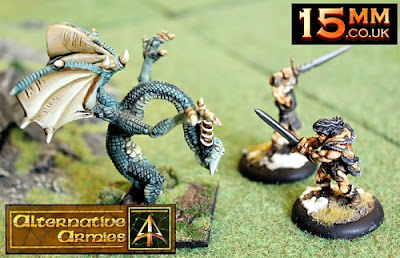 If you are keen on a joint order for products from Alternative Armies and 15mm.co.uk then it is totally possible and all you need to do is send an email asking for what you want to either place. All the details are in the article.

Thanks for Reading. GBS
Posted by Gavin Syme (GBS) at 04:57 No comments:

Alternative Armies has released a complete set of the classic 25mm / 28mm white metal Space Marines originally by Asgard back around 1980.  The single miniatures have been up on our website for a year now but it was pointed out to us that while we were showing love to the classic Asgard fantasy Barbarians with a complete set with saving we had not done the same thing for the Space Marines!  Well that would not do so here we are!  Go HERE.

Personally I adore these miniatures.  They just scream old school quality and they are lovely to hold and to use on the table.  Despite being from the dawn of science fiction wargaming and working the whole 2001 and Moonraker look they are still contemporary for near future use in play or for vintage setting games as well.  We have been told of and seen these figures in the collections of many wargamers all over the world.  Painted in a myriad of colours and shades.  Here is a listing of the single miniatures and these are all in the set too.
SM1 Space Marine in full armour
SM2 Space Marine in light space armour
SM3 Space Marine in full battle armour
SM3A Space Marine in full battle armour flying
SM4 Psionic Marine with Psionic blaster
SM5 Space Trooper with Force Axe in Battle Armour
SM6 Space Trooper advancing with AP Rifle
SM7 Space Trooper kneeling Firing Energy Mortar
SM8 Space Trooper Captain
SM9 Large Battle Droid
SM11 Space Marine Mortar with crew (3 Miniatures)

Here are some pictures of the single miniatures from SM1 through to SM11.  You gotta love SM9 Large Battledroid...if you gave HAL a body... 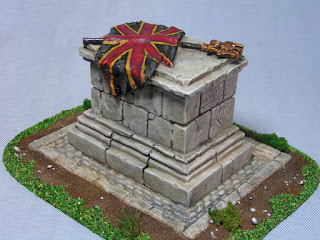 After a break the master model maker and long time Flintloque fan Tony Harwood has graced us all with some blog posts showing his take on our great 59010 Slaughterloo Monument.  We were giving this 28mm scale resin monument away in orders last month and hundreds of them went out across the world including quite a few painted by our staff with a variety of flags (another blog post perhaps!). Tony decided to paint his own up in the same way that Sam Croes did our one in the studio here.

You can visit his blog posts in the following order from their start to end to follow the process shown in the pictures here.  He goes into details of tools used, paints, techniques and so on. 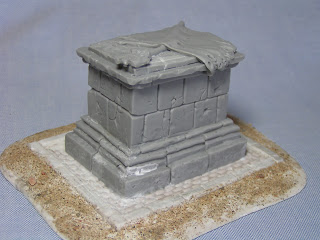 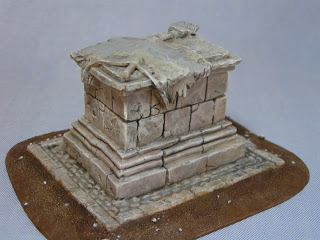 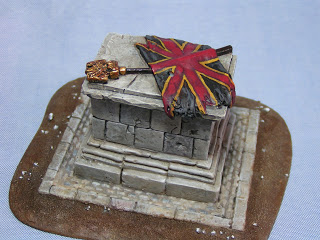 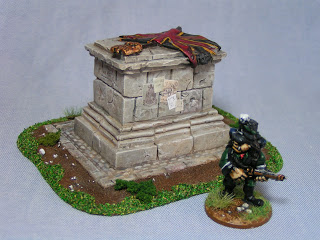 Alternative Armies have produced this resin terrain piece to commemorate the actual World Events of June 18th 1815, it depicts a bullet scarred monument of stone blocks topped with a draped Greate BitOrc Flag (the one featured on the old Flintloque Box set) and a broken Ferach Eagle. 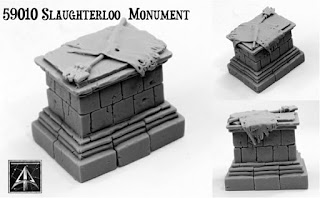 The monument is on our website for regular sale now at a great price.  Go HERE to see it and learn more.