Alternative Armies is marking the two hundredth anniversary of the real world historical battle that gave our Napoleonique Fantasy Mass Battle Game its name with offers and a new scenic piece which will be given away free with all qualifying orders; plus a surprise.  The offers run from Monday 15th June 2015 until Monday 29th June 2015 and will be as follows: 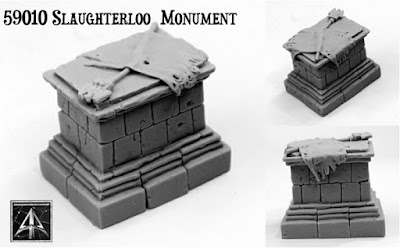 59010 Slaughterloo Monument
This brand new 28mm scale resin scenic piece is our tribute to the real world events of 18th June 1815 and depicts a bullet scarred monument of stone blocks topped with a draped flag and broken Eagle standard.  Based on the Waterloo Monument and telling the tale of an Empire broken and an Alliance triumphant on its top its a great piece for World of Valon and historical wargaming too.  Place it on your battlefield!  It is one piece and measures 60mm wide, 40mm deep and 45mm tall.  Price 5.00GBP. 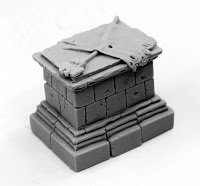 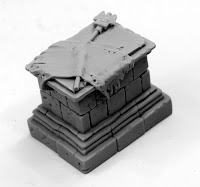 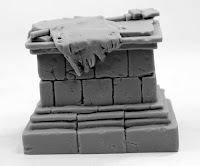 It will be released at the start of July by Alternative Armies but during the offer period it will be automatically placed FREE in all qualifying orders.  A qualifying order is one of 20.00GBP or more product value placed between the 15th and 29th of June 2015 on our website or by telephone or email.  We would expect you to be ordering Flintloque and Slaughterloo codes but the offer applies to all orders so if you want High Fantasy or Erin or Typhon or anything else then you will get the monument as well.  Lastly if your order is pro-painted and of 20.00GBP or more then we will supply the monument painted to you!

To mark the anniversary we will take 15% off the prices both unpainted and painted and based of the following codes and this applies to single troopers, skirmish sets and unit boxes too.  During the offer period these will all be on our DEALS AND OFFERS page at the reduced prices.  Its the perfect time to stock up for the summer campaign and to get something cool free!

The Battle of Slaughterloo involved troops from a great many nations but ultimately it was a struggle between the Elves of Armorica under the Emperor Mordred and the combined armies of Greate Britorcn and Krautia under the command of the Duke of Wheeling-Turn. 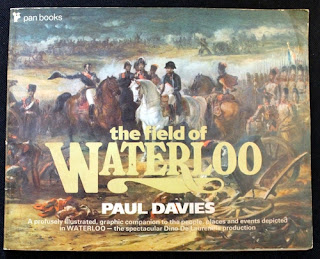 I have a copy of 'The Field of Waterloo' by Paul Davies published by Pan in 1970 to go along with the Waterloo movie starring Rod Steiger and Christopher Plummer; one of my favourite films of all time.  Its worth about 10.00GBP and its in good condition and while it contains nothing unique it is rather rare as it was a promotional paperback.  I am going to randomly draw an order number from all qualifying orders placed between 15th and 29th June on Alternative Armies and 15mm.co.uk and then mail the book to the winner!  A qualifying order means products from Flintloque, Slaughterloo on Alternative Armies and the Brickdust 15mm Napoleonic range on 15mm.co.uk of any value.  The draw will be blind from a hat and the winner announced.  I wanted to mark this anniversary in my own way and to make it a bit more fun in my own way. 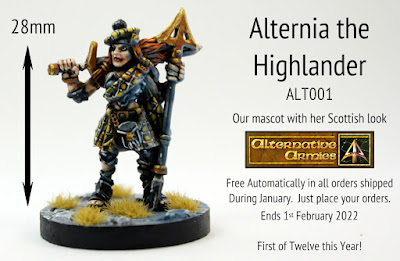