Back at Alternative Armies in the 15mm HOT Range the first of five packs of now in resin 40mm frontage scenics. Excellent for use in 15mm scale in systems such as HOTT for strongholds or outer defences and such or in wargaming in general. Once they were white metal and now they are resin and a dozen to the pack for just 5.00GBP. Superb! 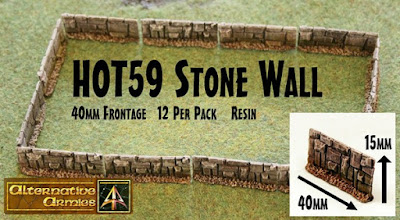 Go HERE for the HOT Range or read on for more information. 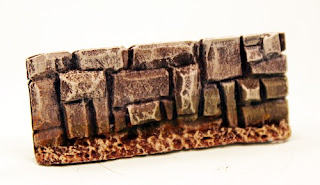 HOT59 Stone Wall
This pack contains twelve identical resin pieces each a stone wall which is 40mm long and 15mm tall. You can assemble 480mm of frontage with this pack and they can be used in 15mm or 28mm scale for a head height or knee height structure. Form walls, field enclosures and more. Useful in HOTT 2nd Edition to make a stronghold for your army. Go HERE. 5.00GBP per pack. 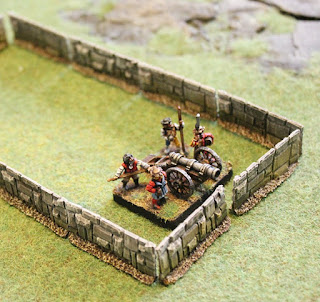 Above is a scale shot showing 15mm Altuos miniatures MR34 based for Furioso and a 28mm Flintloque Elf from 5024 to give you an idea of how the walls look on your gaming table. Also an image of MRX1 with MRX7 cannon and crew using HOT59 (one pack of twelve walls) as a firing position. 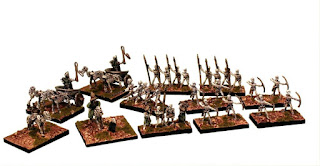 We have a large range of 24AP pre-made armies for HOTT which you can see HERE. All the miniatures and element bases included. 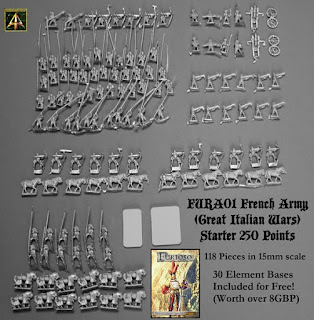 We have a full range of miniatures and some pre-made armies for Furioso. See them all HERE if you enjoy 15mm scale Renaissance warfare.

The wind blows and the skies are dark..the January Storms are here.  As we lurk indoors to stay out of the rain, snow and cold our month lon... 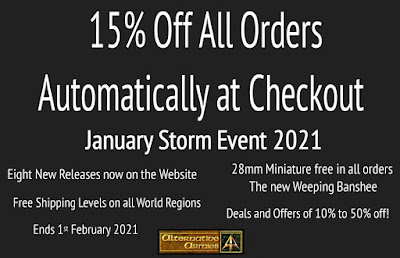