Sometimes a miniature or a model comes along that just makes you smile and wonder at the awesome nature of the hobby we all enjoy.  Things never to be seen in the real world which can appear on your table or in your display case.  Today is one such day and we are delighted to offer you the largest fantasy sculpt since 58020 Jigoku the Giant Oni who is 100mm tall in the Kitton range. 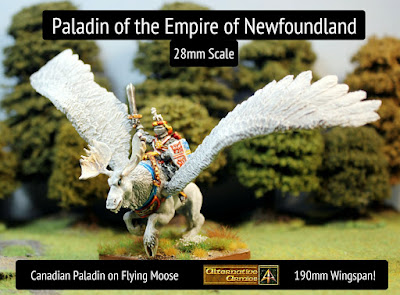 JBC00 Paladin of the Empire of Newfoundland: A superbly original kit sculpted by John Bell (Sengoku 15mm Japanese Fantasy, Frontear 28mm Wylde West, SHM Range) who is a native of Canada.  A center piece for your collection with many cool details. 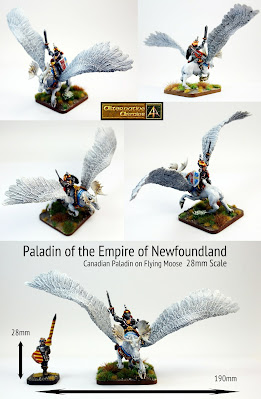 Resin and Metal kit with fifteen pieces composing a plate armoured human paladin rider with sword raised and a separate shield and musical instrument.  A moose body with four separate legs and separate head and antlers plus a wrap of coils to act as reins for the paladin.  Two mighty feathered wings and a specialised base with plug points.  When assembled the model is 70mm long nose to tail, 55mm to top of rider and 190mm wide wingspan.  Please note this is a complex model to assemble compared to typical Alternative Armies codes. This model is supplied with a metal base (shown on this and a larger 40mm square cartouche base) and is supplied unpainted and unassembled.  Other miniatures shown for scale only and not supplied. 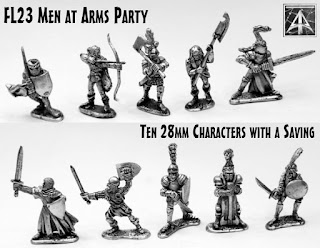 A good counterpart to this new release could well be our FL23 Men at Arms Party which contains ten different knights and soldiers of a high fantasy lean.  It also has a saving off single purchase of its contents.