Wave Five is now released! The Sengoku range of 15mm scale Japanese Fantasy sculpted by John Bell is the largest such range in the world.  It now has one hundred single codes as well as value packs plus five complete wave sets (with a 10% saving) and two HOTT 2nd Edition 24AP Armies supplied with all needed element bases.

Great for Japan themed games or spicing up your 15mm fantasy or pulp or post-apocalyptic collections among many others.  As well as Male and Female warriors there are Male and Female Buddhist monks.  There are Goblins and Kappa was well as Tengu and Oni.  Sengoku has Ghosts, Snakes and Monsters plus centipede, snake and spider bodied warriors and monsters.  School Girls in Japanese uniforms, Goblin Cavalry, Plant Sprits and Ghosts. Tanuki as well as Baku, Nekomata, Inugami, Nurikabe  and Demons.  Now Soba Shop as well as more Oni armoured and shaman plus Policemen, Demons, Samurai, Ronin and sprues of helmets. Go HERE for the range page where all the miniatures are.

SGFP26 The Sengoku Set V
Sixteen white metal miniatures, two sprues of accessories and a Soba Shop kit designed by John Bell suitable for use in any oriental themed 15mm scale game system or army.  This is a set containing one of every pose in the fifth set of the range SGF82 through to SGF100.  Small amount of Assembly required. The pack offers a small saving off single purchases of those codes.  Get one of everything! 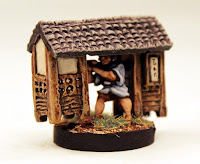 SGFP27 Soba Shops (2)
This pack contains two kits to assemble two Soba Shops carried by a Peddler which are single code SGF82.  The pack offers a small saving off single purchase of this code. 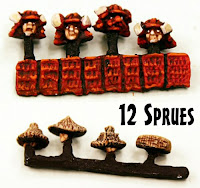 SGFP28 Kabuto Helmets and Staw Hats (12)
This pack contains twelve sprues of Kasa Straw Hats, six of four on each, as well as six sprues of four Kabuto Helmets with eight Sode Shoulder Guards on each sprue.  Taken from codes SGF83 and SGF84.  Excellent for diorama, conversions and other uses.  This pack offers a small saving off the single purchase of these codes.

SGFP29 Armoured and Angry Oni (12)
This pack contains twelve mixed Oni in armour and armed with Tetsubo as well as Claws and a Shaman (typically two of each).  Taken from codes SGF85-SGF90.  This pack offers a small saving off the single purchase of these codes.

SGFP30 Deadly Monks and Policemen (12)
This pack contains twelve mixed miniatures in two parts.  Skeletal Monk, Demon Monk and two different Policemen with Tsukubo and Sasumata evenly mixed and with plain legs of two types.  Taken from codes SGF91-94. The pack offers a small saving off the single purchase of these codes. 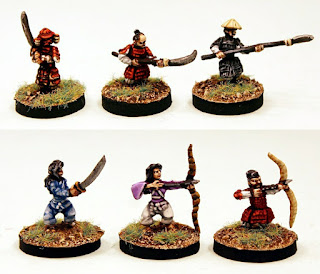 SGFP31 Armoured Samurai with Ronin (12)
This pack contains twelve mixed miniatures in two parts.  Armoured Samurai with Katana, Naginata as well as Armoured Ashigaru with Yari and Bow plus female archer and Ronin with Katana. Supplied with a correct mix of armoured and plain legs.  Taken from codes SGF95-100. The pack offers a small saving off the single purchase of these codes.

Here is a list of all the new miniatures which you can get as singles HERE.

In 2018 we are planning in co-ordination with the sculptor John Bell a wargame title in the Sengoku setting concerning the hunting of creatures.  We will give you more information on this at the time but for now we hope you like the new 15mm scale miniatures.  If you missed the previous waves for our Japanese Fantasy miniatures you can get all of the poses in four complete sets.  Here they are all with unique poses and no duplicates.  Go HERE and browse the range. 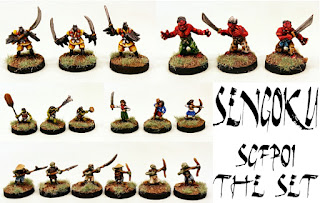