It is my pleasure to present to all the players of Flintloque the seventh free scenario in the Escape the Dark Czar arc for download from our website or right here in this article.  It is a fun and different continuation of the scenario arc and is meant to be played solo.  Can you pick your way across a field of awakening Zombies?  Find out now!  Go HERE for all our free downloads or read on for the link and more information. 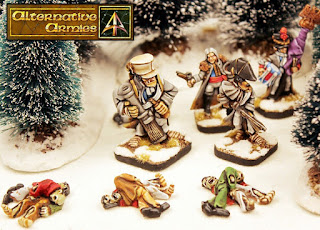 “Snow has a sound to it.  It does.  You would think that frozen water would much the same no matter where you find it.  But that is not true.  Not at all.  In the Witchlands the snow sounds different under your scarred leather boot and frost tainted foot.  In the avenues of Lyonesse the winter snow was a thing of beauty and it sighed as you stepped upon it with a promise of a future summer.  Here the snow crackles and shatters underfoot as if it is laughing at you.  Not that it is.  Rather it tells of a summer which will never come and of a deep cold that has been in place for all of time.  Snow has a sound to it here.  It sounds like death.” 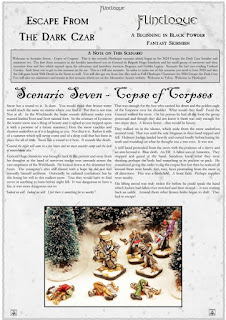 Copse of Corpses – Flintloque Scenario
The seventh scenario for Escape the Dark Czar arc sees General Saindoux and his band of survivors finding themselves in a field of corpses recently visited by the Graviski Re-Animator and they are randomly waking up!  Will the survivors manage to evade and get past the Zombies?  In this strange scenario you can play solo with a nifty mechanic meaning you never quite know when the dead will rise.  It can also be expanded or played with two players. CLICK HERE to download it from our website hosting. 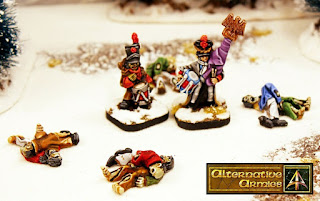 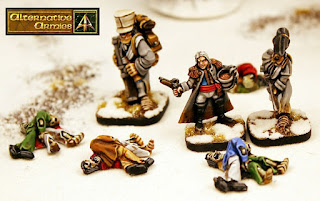 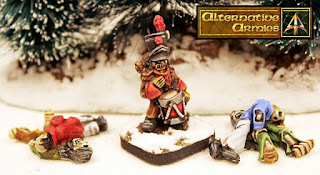 This scenario builds upon the miniatures from the beginners set which has ten resin 28mm miniatures plus bases and the core rules booklet for a fantastic starter price HERE.  It makes use of the Al-Garvey Goblin Legion which are great characters and the only Goblins in the service of the Emperor Mordred. The Undead in the beginners set go great with the new three figure Colour Party for Captain Preserovitch's troops which is HERE on the website.  If you have been playing the previous scenarios you will be all caught up but if not then you need the 'Beginning in Flintloque' page. 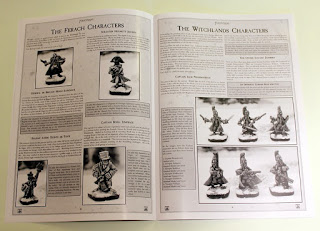 Beginning in Flintloque.  This page on our website begins your journey with the best Fantasy Napoleonic tabletop game in the world and it is where you will find all the codes used in the scenarios in the arc as well as scenics and free items such as the scenarios and video reviews of Escape from the Dark Czar and Death in the Snow by the Talking About Gaming independent channel.  There is also a page on our blog for those new to the game HERE. 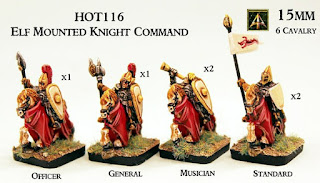 June is nearing its end and while we still have Andy Jefcoates latest instalment of his Flintloque adventures to come we have made all of our releases.

“Hubble bubble, toil and trouble, such is magic and its subtle...”    Alternia's are nearing their completed state and this month number... 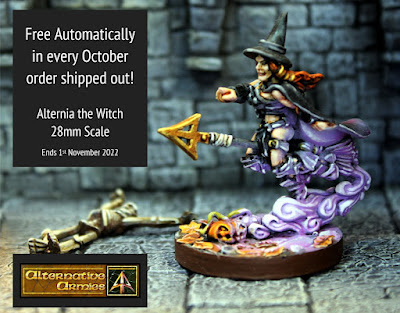