On Tuesday 21st June Alternative Armies will be releasing with offers a brand new giant monster into the 28mm High Fantasy range.  This monster will be a Giant Troll suitable for use with an Orc, Goblin or otherwise evil army in any wargame system. 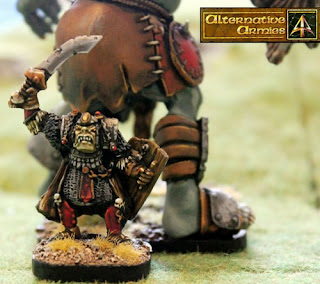 Designed by the Alternative Armies studio and cast in high quality grey tone resin it will be a multiple part kit which once assembled will stand at just over 100mm tall.  The first castings are now coming out of the molds and it is looking superb! What is more every Giant Troll will be supplied with a 50mm square base and an exclusive free resin 28mm Orc veteran warrior worth 2.00GBP!  Shown in the above image. 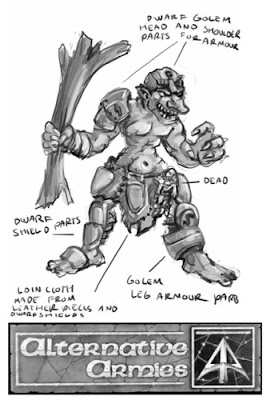 You can see our Orc and Goblin high fantasy range on our website HERE and our Monsters and Creatures range HERE.  The new Giant Troll will appear on both these pages as well as our Limited Time Offers page too.   We are really excited about this big kit and we wanted to give you access to the concept art and also details of the coming release offers.

Giant Troll Concepting
When Alternative Armies began the re-molding and re-releasing of our huge classic high fantasy 28mm range part of the conversation concerned what we would do once we have accomplished that lofty goal.  While the work is ongoing with the CA Adventurers, Halfings and Wizards codes now on the website and next up the FL code structure we began with the Dwarves (DH) and the Goblinoids (OH) and these are all on the website in their white metal glory. So once the OH codes were all out we wanted to add to it with something new and what do Orcs and Goblins 'love' more than anything else...it has to a Troll!  Not just a Troll but a ruddy big one because as we wargamers know Trolls can grow elastic like to great heights.  Sam Croes sketched out a design that melded the newer medium of resin with the golden age style of miniatures.  Thus a Giant Troll about 100mm tall with distended belly, ropey muscled limbs, warty nose and bad teeth was created.  Goblinoids hate Dwarves and rightly so meaning that our Troll would adorn himself with spoils of fighting them.  Known for eating virtually anything the gruesome feature of a recently killed Man in full armour tied to his belt was included. A Giant Troll to be a central feature of an army or focal point of a skirmish scenario.  I think we have met the ambition of growing Alternative Armies OH range successfully with a new model such as this.  If 'Durzum Dwarf Killer' (nice name eh!) is successful we may well create further big monsters.  I felt as I always do that my own style of wargaming and that of Alternative Armies favours durable miniatures and easy assembly as I, as many wargamers also are, am not a skilled modeller.  Complexity should be kept to a minimum required.  Lastly we agreed that such a large monster deserved an additional freebie included for fun.  Wargaming should be fun after all. We present to you our 100mm tall giant troll. 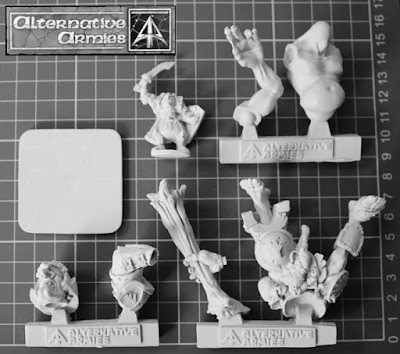 Above you can see the sprues and pieces which make up the Giant Troll kit including the base and the free Orc veteran warrior.  They are laid on a square centimetre grid to give you an idea of the size of the pieces.  An easy to assemble and durable kit.  As you can see OH31 Durzum Dwarf Killer is wearing armour composed of scavenged or won parts of a Dwarven Golem war machine.  In fact parts of our own DH15 Dwarf Runic Golem!  Durzum is a fine enemy for the double axe wielding magic construct we released back in November.  You can read about this popular model on our blog HERE.

Coming Release Offers
The release will be as follows and the offers will be in place from the 21st until the end of June when the normal price will apply going forward.

OH31 Durzum Dwarf Killer Kit  22.50GBP
One giant troll resin kit supplied with a base and a free Orc veteran warrior worth 2.00GBP.
Save 10% off release price.  Total Value 27.00GBP

Giant Troll and the Golem 38.25GBP
This special offer consists of one OH31 Durzum giant troll kit and one DH15 Dwarf Runic Golem kit and a free Orc veteran warrior worth 2.00GBP.  Save 15% off normal pricing.  Total Value 45.00GBP

I hope you enjoyed this first look concept and information article about this mighty monster.  There is not long to wait until the release offers begin on the 21st June and when the time comes we will be showing images of a built and painted Durzum as well as scenic images of him facing off against enemies including the Golem, Dragons as well as Barbarians and more!  We are really happy with this big mean 100mm tall Troll.