Welcome!  It is our great pleasure to present to fans of Flintloque and Slaughterloo some of the excellently painted miniatures from Mark Taylors collection.  Our thanks to him and enjoy.  On our blog click on the pictures to make them much larger and follow links if you like any of the figures. 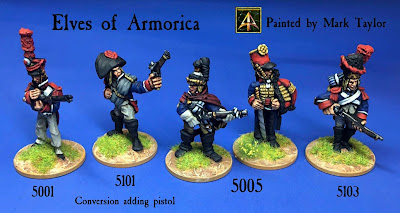 We begin with Elves of Armorica the prime movers in the Mordredian Wars.  From left to right an Elf Voltiguer of the original 5001 Flintloque boxed set, a gunner from the 5101 Artillerie Cheval converted to hold a pistol, two Elf cavalry on foot taken from the 5005 Lady Wintermore's Fangs excellent set.  Lastly a veteran Elf of the 5103 Grenadier Garde de la Mordred the 'column' set. 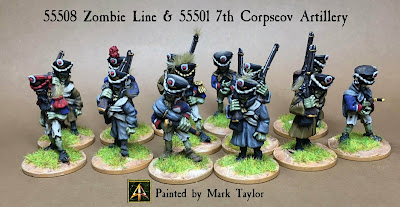 The dead walk...in ranks!  In the frozen Witchlands the re-animated dead fight for the Dark Czar.  55508 Zombie Line carry their muskets and are joined by gunners and the officer from the 55501 Corpseov Artillery Crew.

For the Elves of Armorica light troops are vital in fighting any enemy.  Skirmishing ahead of the marching columns of infantry the 5001 Voltiguers with their tall plumes are led by an officer and sergeant of the 51518 Chassuers.

In the Garde the colours of the battalion are guarded by Elves armed with pikes and with axes such as the soldier from 5103 (pose D).  Dark Elves are enemies of the Ferach and they have some style such as the leader of 51001 Dark Elf Guerillas alongside the 53016 Hob Goblin Miser.  The men, even Elves, will get thirst and hungry so they desire the services of the 51048 Elf Vivandiere or that of the Surgeon from the 51503 Elf Field Hospital.

Standing firm against the predations of the Ferach Empire the mighty power of Greate Britorcn has legends among its troops.  From the newest 54057 Major Giglamps to the original Captain Sharke and Sergeant Harpy from 5001 Sharkes Rifles.  Lastly a sergeant armed with axe bladed spontoon from 54510 Orc Guard some big lads!

One company in every Orc Battalion is that of the grenadiers.  Typically the meanest Orcs and these 54509 Orc Grenadiers are excellent troops.

Some officers are heroes, some are aggressive or cowardly but this 54506 Orc Command officer is rather dastardly (he is certainly plotting something).  58503 Orc Deserter Infantry is an eclectic mix of soldiers who have defected to Obidiah's Deserter Army and in this case Mark has painted up his one armed artillery orc in his blues.  There are many small packs of Orc Infantry from different regiments of foot and here is a running soldier of 54007 62nd Foote Centre Company.  Rifleorc Tunge a classic from 5001 Sharkes Rifles.

Lastly we have one of my favourite miniatures in the whole massive array of Flintloque miniatures a dismounted 54013 Orc Dragoon armed with a pistol; he could be a trooper or an officer.  There are many limited edition miniatures from the original Obidiah to the latest General Koda and Aide this is the VLE08 Orc Chaplin who features in 5027 Grapeshotte rules. 54019 Albion Marines such as those who serve upon the flag ship of Admiral Nelsorc can be asked for their opinions by that rarest of things a literate Orc such as 54502 Orc Camp Followers reporter 'Michal Beorc'.
We hope you enjoyed this selection from Mark Taylors lovely collection.  We did!
Thanks for Reading,
GBS
Posted by Gavin Syme (GBS) at 08:02