Allow me to introduce RUFUS to you! This new addition to Alternate Stars is on our website now.  Go HERE for the range. 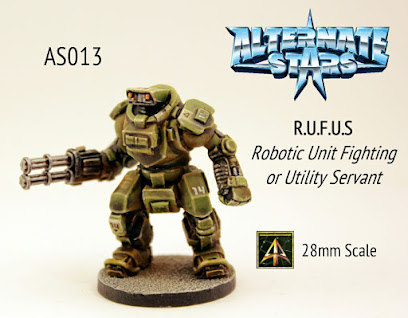 R.U.F.U.S stands for Robotic Unit Fighting or Utility Servant and this type of Android is deployed across the Star Empire to bolster troops.  It is also used by merc crews and brigantines as added muscle.  Over time their neural nets develop personalities. A larger model (40mm tall) in any game system of your choosing beyond our little snippet of possible setting.  Useful in 28mm and 15mm settings as a war droid or personality. Composed of a resin upper body, resin legs plus arm with fist and arm with double chain cannon in metal. 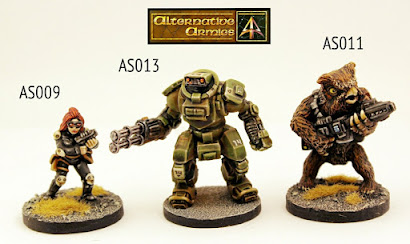 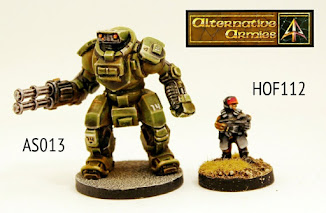 Scale shots against other Alternate Stars miniatures and an SFA Trooper from the HOF 15mm Science Fiction range. 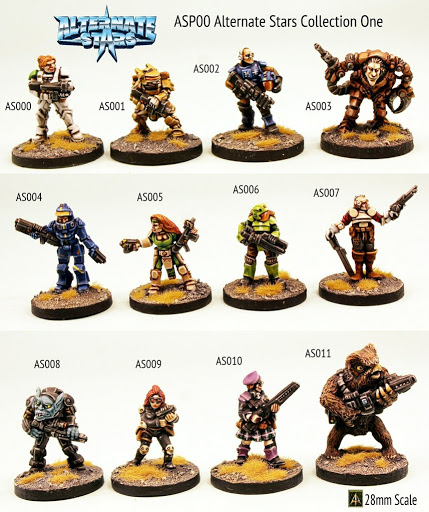 We are well known for Flintloque for our High Fantasy Ranges for our Ion Age science fiction all in 28mm scale plus many more and as a long established company with a proven track record. Alternate Stars is totally generic (do you like the play on our name?) and each miniature has its own style and potential uses plus some of the characters draw their inspiration from other parts of Alternative Armies....can you spot them?  There are twelve other character poses plus a set of all twelve with a built in saving.

Lastly there was an independent in depth review of the range made by Tabletop Games UK.  You can read it on their site HERE.