We are delighted to follow up on last month and 5006 Obidiahs Army with two more classic Flintloque sets now in new molds and expanded out onto the website for 2021.  From the late 1990's it is 5108 Obidiahs Cavalry and 54501 Obidiahs Army.  Go HERE for the deserter army or read on for more. 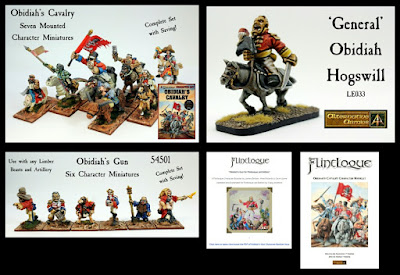 The story of former Sergeant of the 62nd Foote now turned General of the Deserter Army Obidiah Hogswill is one of murder and greed.  One of the most eclectic and interesting armies in the World of Valon you will find many different races and ranks within it but all with one thing in common; that their own armies want to see them swing from a rope! 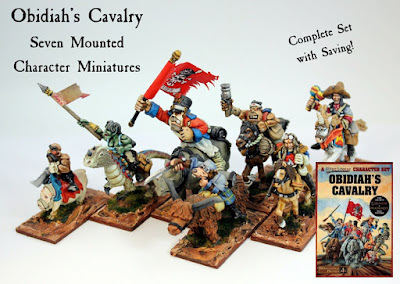 Bizarre and brutal, the fourteen distinct personalities that make up Obidiah's Cavalry are a strange and unpredictable lot. Often mistaken for an escaped circus act, these seven deadly sins of the equestrian world are a maelstrom of oddities that their enemies rarely experience twice. That there is rivalry between some of the riders of this beastly bunch can not be denied. More surprising is the animosity between some of the mounts themselves. While fists often fly after an excess of ale, hooves and horns often join in as the respective animals stand up for their owners. All of the members of Obidiah's Cavalry respect and care for their beasts far more than they do for each other and this is often evident on the battlefield.  See the seven single cavalry miniatures and the full set with saving.

Drawn to the Deserter General like months to a roaring flame the six rascals who man the artillery for Obidiah are each trouble in their own right. Gorgie Best a former private in the 67th Foote and now the bucket handler for the cannon who likes a kick about. Paddhi Garcia rose to prominence as commander of the captured cannon; he has a colourful history having fought as a rebel in the Murphess Marshes and served in the Guardias de Infanteria Guinelia. Doll Floundas the legendary murdress, prostitute, folk heroine and petty thief from Londinium's slum infested rookeries has been the  subject of many a ribald pamphlet and like so many of these characters it is hard to tell fact from fiction. There are few scum bags as nasty as the fop Orie Ball.  Lyonesse was a playground for his sadism which extended beyond ill manners into the kind of depravity practised by the notorious Marquis de Slade. The Dwarves are renowned in Valon as artillerists of distinction and none more so than Henrich Blindenbuogar. The legendary Rat gunner Sweeney Bob was a fugitive from Orc justice, having been part of the army of  Bob 'Boy' McGroggy that was defeated in the doomed '45 rebellion. Having served as a artilleriest in the rebellion, and gained a useful reputation on account of the skill he displayed in laying guns against the Orcs.  See the six single characters and the full set with saving.  Use these six with any artillery piece and limber beasts. 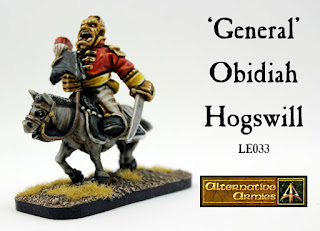 See them HERE along with all the other deserters and a limited edition mounted General Obidiah too.

It is our intention to continue the growth of Flintloque in 2021 not only with brand new releases and with re-mastered existing packs but also with remolding and offering as singles other big sets such as these here.  There is so much to see in the World of Valon. 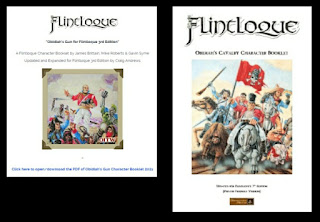