The World of Valon is a vast place and always getting bigger with releases across all of the armies which march in games of Flintloque and Slaughterloo.  A part of this process is a continual replacement of our mold stocks to ensure clean and crisp castings are shipping out all over the world from here in Scotland.  Typically we do not discuss re-molding as it is a routine act (though some ask us all the same) and speak about it only when something special happens.  A long lost returning, a not before seen classic, a re-master of a pose and such things.  We have all of that here now with a dozen classic packs back in production and with new pictures too.

The March to War Event 2021 is on until 1st May (read about it in detail HERE) meaning 20% off at checkout on orders and much more. 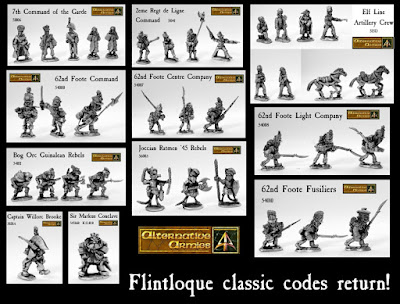 The easiest way to get these across to you is in an article and if you follow the link for each code you can see it where it resides in the range.  Elves of Armorica, Orcs of Albion and rebels of Joccia and Guinalea all feature. 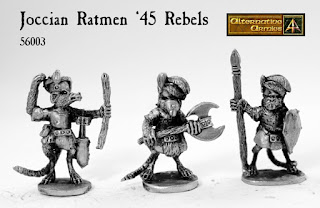 56003 Joccian 45 Rebels:  Joccia is a land of mountains and misty glens where wild Haggis roam free.  In the upheaval of the Ferach Revolution the Ratmen of this land rebelled against the Orcs of Albion.  The '45 Rebellion was a vicious conflict and one lost by the Joccians.  These Ratmen carry primitive weapons. Go HERE.

54011 Bog Orc Guinalean Rebels: Guinalea is a proud place and the home of the Bog Orcs and much like Joccia it has been occupied by the Army of Albion and this resulted in rebellion and at times open war against the Orcs.  These Bog Orcs are armoured and carry firelocks.  Go HERE. 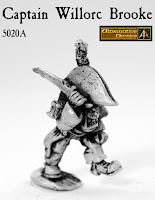 5020A Captain Willorc Brooke:  An Orc Officer who was the star of the 2nd edition of Flintloque called 'Flintloque Reloaded'.  Retired in 2008 and now re-mastered this officer can lead any section in your Army of Albion.  Go HERE.

54516C Sir Markus Conclave: The Kings Own Rockette Batteries or K.O.R.B are the exotic artillery of the Army of Albion.  Their purpose built launching platforms send rocket off in soaring dizzy arcs often as dangerous to the Orcs as to their Elvish enemies.  Sir Markus Conclave is the prime mover in the K.O.R.B and leads from the front in Catalucia. A single 28mm scale metal miniature.  An Orc Officer in greatcoat with monocle.  Re-mastered and returned.  Go HERE. 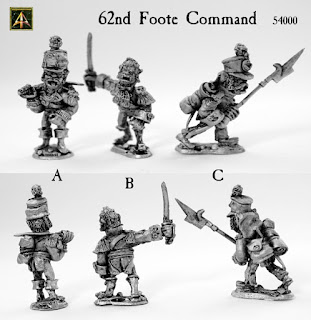 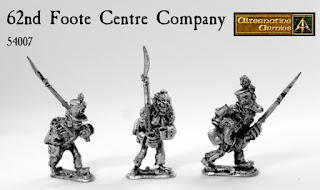 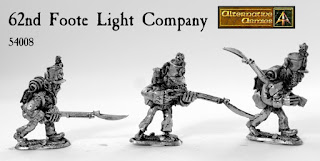 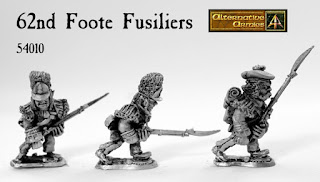 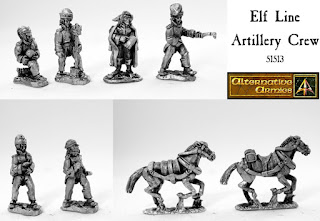 51513 Elf Line Artillery Crew: This code gives you an Elf gun crew with limber horses which go with any Ferach Empire cannon, howitzer, mortar or any other artillery piece.  An officer in greatcoat with papers, gunner with ball kneeling, gunner with rammer, gunner with match, Two gunners in pushing positions plus limber horse with saddle and limber horse with tackle.   Find rules for artillery in 5027 Grapeshotte and 5030 Slaughterloo.  This includes re-mastered pack codes 51027 and 51028.  Go HERE. 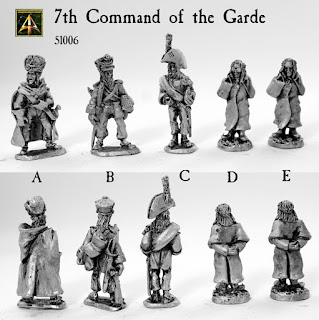 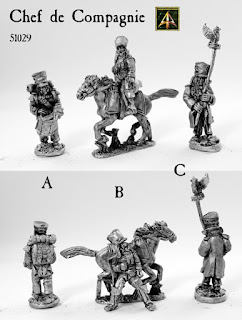 51029 Chef du Compagne:  A very useful pack for both Flintloque and Slaughterloo containing two Elves on foot and an Elf riding a Horse.  Elf Drummer (A) for line units and sections, Elf Officer in greatcoat with running horse (B) and Eagle Banner Bearer in greatcoat (C). You can choose a pack or any pose in the pack (see the letters on the poses) on this page in any quantity.  Go HERE. 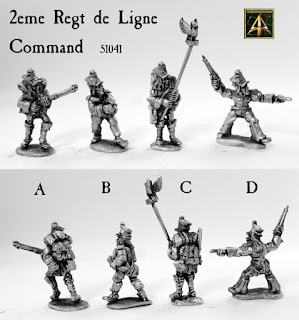 51041 2eme Regt de Ligne Command: A very useful pack for Flintloque and Slaughterloo if you are fighting in the warmer climes of Catalucia or Al-Garvey.  Contains four 28mm metal Elves these being a running trooper with musket (A), a Sergeant drawing Sword (B), a Eagle Banner bearer (C) and an Officer with High Elf Duelling Pistol (D).  You can choose from a pack or poses in the pack (see the letter on each pose) in any quantity.  Go HERE.

There you go and we hope you enjoy.  Several new options and some codes not seen in ten or even twenty years.