Now in new molds two different versions of the same monster taken from English myth and legend.  This type of work is constantly going on at Alternative Armies as we keep the many thousands of miniatures we produce in good condition for customers.  We wanted to show you the new pictures for these creatures. 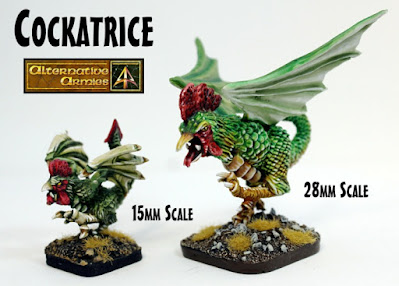 You can find the larger model in our 28mm Monsters and Creatures Range and the smaller model in the HOT 15mm Fantasy Range or by going to the website and searching by code and key word.  A couple of wee stories for you now. 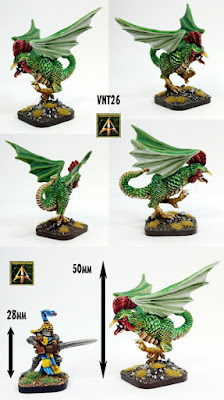 “It be a monster of magic I tell you. The head of a roosting bird and the body too, it has a tail topped with a wicked arrow like sting. Leathery bat like wings and a beak that could pierce plate armour. It is bigger than a war horse and some say its gaze can poison a Man to near instant death. Me thinks it might have come from misty Albion in origin but much smaller being from a yoke less egg sat upon by a toad. When you face it lower your visor and strike hard using a shield to guard from the beak and the claws upon its feet. Strike hard and fast for its breast. How do I know this? I have killed a Cockatrice found in Verhell and it made for fine roasting and eating!”

"In the legends of old England at Wherwell there is a creature sized of a great cart horse known as the Cockatrice. The egg of a Cock incubated by a Snake will give birth to a monster which will grow into that with the head of a Cock, the body of a great Bird, the tail of a Serpent and wings of a leathery beast of the air. It could be prevented by tossing the devil egg over a loved home without it striking beam and landing upon the other side to smash. But in battle this monster must be avoided in its glare and in its touch for it can cause death with the 'darting eye' and with its poison breath and axe like beak. With sword and might or with that most precious of things a mirror will you defeat the Cockatrice."