“Farmer Jones got a real surprise on Friday morning for he did not know that the Zeta Reticulans had visited his dairy farm during the night and had 'uplifted' his cows.  Rather than happily queuing up for the milking machines the cattle were walking about on their hind hoofs and carrying death rays!  Farmer Jones never managed to tell his wife about this..but she heard the herd atomise her man and his dying scream.” 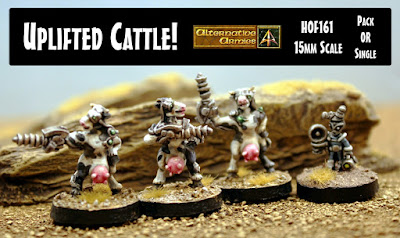 A new code in the HOF 15mm Science Fiction range gives you three poses of cyber augmented cows armed with heavy death rays projectors.  It is also our last in the massive expansion of the Grey Aliens in the range. Our thanks to veteran wargamer Fred Richards. 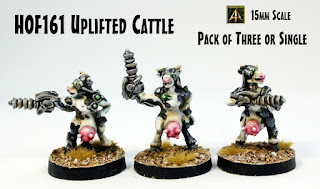 HOF161 Uplifted Cattle: This pack contains three 15mm scale metal Cows in a three different poses. These were once normal cattle but now cyber and generically uplifted they obey their overlords. Each miniature is approx 23mm to eyeline in scale with the rest of the HOF Range.  Eye lenses and cables along with other odd devices make the Uplifted Cattle very strong. 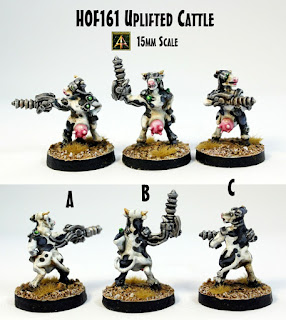 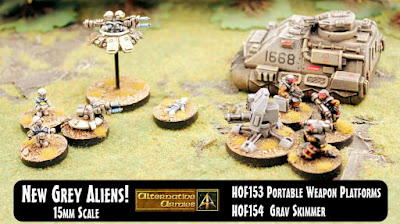 The grand and noble HOF (Hordes of the Future) range contains a wide variety of 15mm Science Fiction Miniatures and Vehicles. Each miniature is on its own integral base and made in high quality metal or grey tone resin.  Humans (Security Force Alpha, Cultists, Post Apoc Warriors, Rim Mercs, Civilians), Aliens, Mecha, Robots and much more besides in more than one hundred and sixty codes of some four hundred poses. These miniatures can be used for any purpose in this scale. Every code can be bought as a pack or you can also choose single miniatures from pack codes within them.  Refine your search on the range page by type using the 'Filter By' box.