So you get the go ahead from the tribe elder and you pick your way through the burned out monuments and the scattered covered corpses reaching the park in a short leisurely stroll.  The baby gurgles over his first tusk in the pram while his mother looks on with pride and dad growls as he watches the wean with his ice cream stolen from a puny Human.  It is an outing..an Orc Family Outing!  Go HERE. 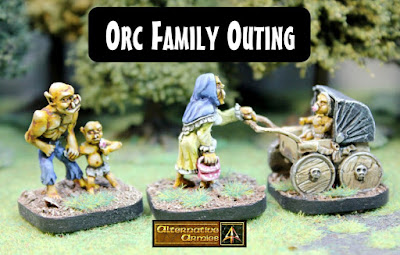 Alternative Armies is continuing to return the 1980's classics by Tabletop Games and Asgard to the website in new molds and with new pictures.  With the Torture Chamber range completed (including several models never seen at the time) and the Warbirds back in the world it is time to progress with the Collectors Sets.  We aim to bring one back each month which will be a set or parts from it.  All great fun. 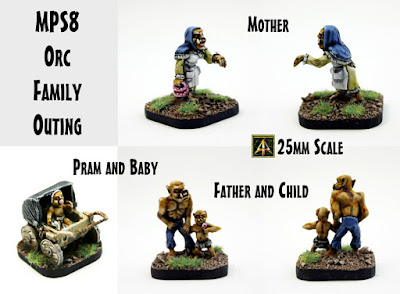 Not everything a wargamer wants has to do with putting troops onto the field. Sometimes something a little different, a bit special makes an appeal to a wargamers nature and says 'now that is fun!'. Excellent characters or a superb diorama or just for fun. This is what you get in the complete set:  Pram, Orc Sitting Baby, Orc Mother arms raised to push pram, Orc Father holding hand of Orc Child. 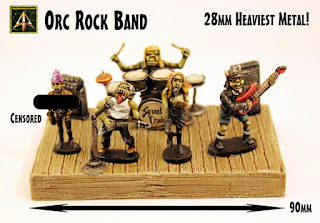 We began our return of the collector sets with the Orc Rock Band which is on the website.  We called ours 'Spinal Crack' but you can call yours anything you want.  Choose from any of the parts or get the whole band with the stage too.