"We rode north as one. A thousand Men sworn by the mother church to defend the lands against the darkness and perversion that threatened us. Little did we know that the darkness lingers not deep from the surface in some Men. As we rode the voices whispers and shadows lucked in the forests and soon one then another and another fell away until when we came to the snow line there were but four hundred left and we had seen no foe. It was then our faith was splintered as ahead we saw our brother knights but they were not as they had been. Twisted and filled with the bane of life they were now of the darkness. Evil is all the more when once it was good." 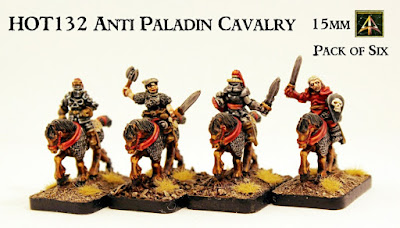 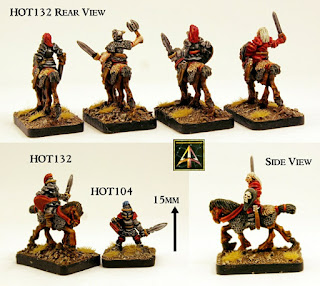 HOT132 Anti Paladin Cavalry
This pack contains six metal rider and horse in a random evenly mixed of four different poses. As with all HOT 15mm Fantasy codes you can purchase one pack or you can choose a sampler which gives you one of each pose of miniature from this pack; a great way to try or to make skirmish forces with HOT. Go HERE.

HOT104 Anti Paladins
This pack contains ten white metal 15mm scale miniatures in a random mix of four different poses. As with all HOT 15mm Fantasy codes you can purchase one pack or you can choose a sampler which gives you one of each pose of miniature from this pack; a great way to try or to make skirmish forces with HOT. Go HERE. 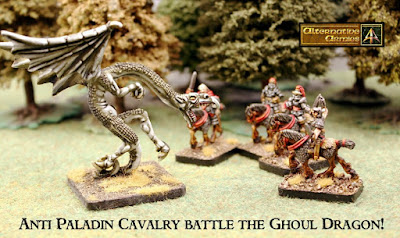 The HOT100 Ghoul Dragon is a mighty foe indeed and while evil traditionally fights against good it also wars with itself when nothing better takes to the field.

Between the two packs you can make a great skirmishing force. Above is a line up of all eight poses across HOT104 and HOT132.
Thanks for Reading,
GBS
Posted by Gavin Syme (GBS) at 09:14