It is important to note that the creation of the Prydian Army actually contributed greatly to the rise of both Yordan and Canlaster. Before the formation of the Army the Marcher Barons had little room for movement, they could hire mercenaries and police their own worlds but the Starvaulters kept them in check. Taking men and women from the planets of the barons and giving them so much training and weaponry only stoked the fires of civil war. Certainly they put down the rebels for several years but then they became rebels themselves as their loyalty was first to their baron and not the throne. Granted not all of the regiments abandoned the throne but we have very much been the architects of our own demise. We were warned by many but we chose to ignore them all. Kadj Dace got what he wanted, not by the means he planned but by accident of design. Prydia is aflame and none among us can stop it. Lord Turnbull, Glastonbury Tor.

Before Patrol Angis and the titanic expansion of the 15mm Ion Age range there was MOTH the skirmish game system for the more than three hundred poses in the 28mm Ion Age miniature range. MOTH has been out of printed stock for a long time but upon customer request we had a short new run made up! So you can get the book in print or paid digital download (20% less than print) now. MOTH was the starting point for the Prydian Civil War. 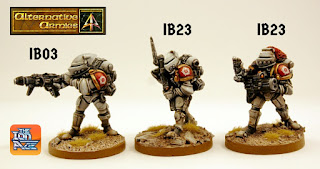 Three Prydian Retained in their typical white and red titanium plate. Every miniature can be had as a pack or within the pack as single poses. We also have value sets of whole platoons and lances which give you miniatures for free within them. Retained, Muster, Legion, Betrayers and Malig Goblins. Great for any 28mm game system in space opera style! 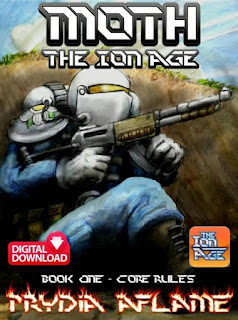 There is a free folder of useful files for MOTH which is now on the page for the book with a link. It contains rosters, templates and a starter scenario which ties into the book too. Go HERE for the range or you can CLICK HERE to download the file from our server right now.
Moth lets you to play out anything from a small skirmish with half a dozen miniatures a side right up to a squad level battle with more than a hundred miniatures in play if you so desire. Play with 28mm OR 15mm miniatures from the Ion Age. This is a game that is fast to learn, fast to play and great for younger novice players and experienced tacticians alike. Moth has a clever central mechanic based around the D10 (ten sided dice) and the adaptable Elan Rating system. This, when combined with fluid squad mechanic allows players to add to and remove from their squads in play. Plus unique features such as Break Shots, Degrade Fire, two action choice among many others makes the game flow excellently and combines tension with fun in battle. Use cover, avoid open ground, call on your fellows for support. Win the Prydian Civil War for your noble masters! 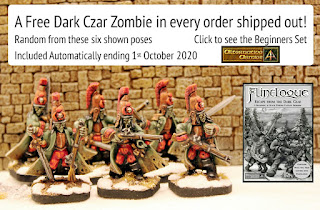 Lastly if you place an order during September 2020 you will automatically get a free 5024 Dark Czar Zombie (worth 2.50GBP) read about this on our BLOG. If you wish...just ask us (by email to sales@alternative-armies.com) with your order number when you place it and I will personally replace the Zombie with a free 28mm Ion Age miniature. Retained if you order Retained or Malig if you order Malig etc. It is my pleasure.
Thanks for Reading,
GBS
Posted by Gavin Syme (GBS) at 03:56