Andy Jefcoate returns with the twenty second article on Flintloque the forth in the adventurers of Gorgon Lightfoote. If you missed any of the previous articles you can see them all for free on the blog by clicking on this TAG. If you would like to Begin in Flintloque visit our website for Escape the Dark Czar and free content and videos.  Enjoy!  GBS 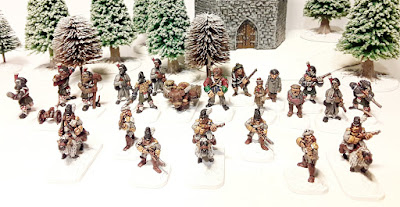 The Adventures of Gorgon Lightfoote - The Support Troops

In my last three articles I've introduced you to the core of Gorgon Lightfoote's Britorcn section and explained how I've used them in my games. In this article I'd like to show you the last but by no means least of the current members in his section, although I'm sure that he'll receive reinforcements in the future!

Depending on the scenario you can often gain an advantage by including specialists and Lightfoote is becoming a master at using the Witchlands terrain to his benefit. As his force is light and fast moving, regular artillery is out of the question, but a Mountain gun has rectified the situation and as my scenarios are often created around a raid or ambush a sniper is useful too! 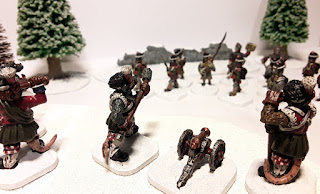 You only need two gunners to use a 2lb cannon, mine are from code 56515 Joccian Artillery Crew and have been painted to match the Blacke Watchit troopers as they are part of their unit as close infantry support. 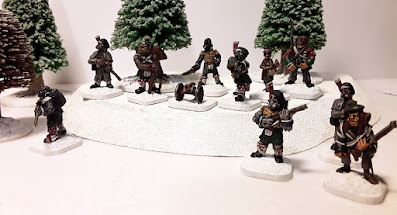 A Mountain Gun can be useful in attack or defense. I usually use it on the end of a line of infantry to support an attack or help to clear a flank of enemy attackers but it is equally useful for holding an area of terrain. At a cost of only 55 points for the gun plus the cost of two gunners I don't know why more sections don't include one. I've already bought a second one for my Ferach force. 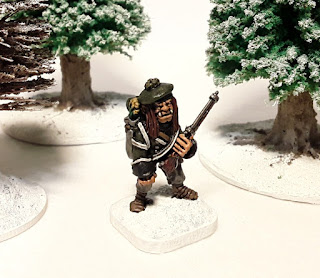 The Sniper 'Old One Shot'

This veteran Rifle Orc was once a member of the 105th Foote in Catalucia but like 'Stab'and 'Grab' he has ended up in Lightfoote's service. He is a loner and probably isn't actually old for an Orc but his time spent out in the wilds gives him a rather disheveled appearance. This and his ability to efficiently take down a target have led to his nickname.

For this character I've used a figure from the classic pack 50010 Sharke's Rifles 1st edition. He still has his 105th Foote uniform but carries everything he needs on his back so this figure is perfect.

In Flintloque 'Old One Shot' is a Veteran and an Elite Light Trooper, which gives him +15% accuracy, +3 Steady, +3 Discipline and +3 Melee on top of his Orc Racial Statistics of Steady 3, Wounds 3, Discipline +1 and Melee +2. He carries an Orcish Bakur Rifle which is very accurate at closer ranges (80/6 up to 15cm and 65/4 up to 45cm) but also has a maximum range of 75cm and has a bayonet attached to give a further +3 in Melee. The only downside of a Bakur Rifle is that it takes 2 turns to reload so in case he doesn't live up to his name this character also carries  a standard pistol.

As if 'Old One Shot' wasn't good enough already I have given him the following skills and traits.

- Stealth (5 points) - After all figures have deployed this character can be placed anywhere within cover such as light woods, buildings or behind a wall as long as he is more than 15cm away from all enemy figures.

- Jamminess (3 points) - This character can re-roll one die roll per game.

As you can see, at 72 points although he isn't the cheapest Section Member 'Old One Shot' can be very useful if you need to take out a specific enemy section member or commander, just what you need from a sniper, but he is also pretty impressive in combat as long as he isn't too isolated or massively outnumbered. 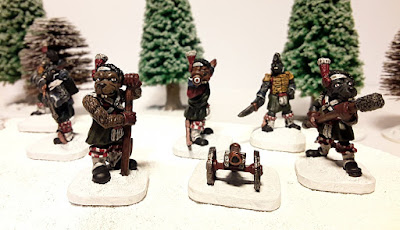 These troops have been perfect additions to my force for specific scenarios, but the Mountain gun especially could be part of any section as it is so versatile and while not as hard hitting as most artillery it's ability to cope with any terrain and cheap cost more than make up for it in my mind. I think that you should get one today, why wait!

I have had fun with 'Old One Shot' in my games. He has fit in well with Lightfoote's force and has played his part in Ambush scenarios helping to capture a lesser Vampyre, he has fought on the defensive in a firing line with the Blacke Watchit when they have been attacked by Zombiski Cossacks and he has single handedly fought his way through a small section of zombies and a Liche to get back to his comrades after being cut off. Characters like this make the Flintloque game so fun to play as you can invest time in them and create a story! 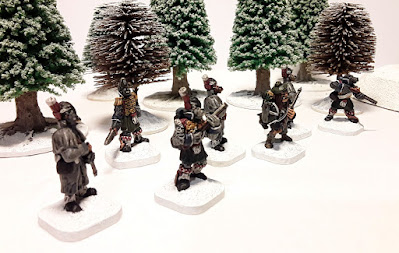 As always I hope that you've enjoyed reading my articles about Gorgon Lightfoote's gallant band and that it has inspired you to try using a different force in your games. He will appear again in the future but for the time being I will be returning to my Ferach and Witchlands armies as there are so many great Flintloque figures to talk about!