These bovid kin are another of the leftover experiments of the past. They are a stubborn and unpredictable lot, but fierce and hard headed in battle, features which put their kind in great demand as troops for hire. The baahl usually dwell in seclusion from other races on the homeworld, in primitive tribes that practice heathen ways. This leads others to suspicion and fear of them, as tales of sacrifice and devouring their enemies are abound. Indeed, they do worship demonic looking pagan gods and spirits, but feel a great affinity to their surroundings and nature.

Auxillary baahl troopers are the descendants of their more natural kin, the next generation of their race to grow up in a more civilised oggum society. As you know, the oggum have conquered vast tracts of their homeworld, which means many tribes were either destroyed, relocated or subdued as a result. Baahl stick together in large numbers even in large oggum settlements, but are segregated. Many of them will form large companies of willing fighters eager to earn a crust and get on with life, so this leads to them being used as hired soldiers on all sides of conflict.

Baahl are adept at war, and take to their new life as soldiers well, the problem is they can be a little quick to anger, especially if lead by oggum commanders other than their own, so each company will be lead by another baahl to avoid conflict within the ranks. Baahl are equally suited to both melee or gun fighting, they pick up new forms of combat and destruction very easily and are not prone to stupidity unlike the oggum, who for the most are a little more slower when it comes to organising themselves. Many Oggum warlords covert the thought of having a small company of baahl auxillaries in their warband as just the mention of facing a number of trained baahl soldiers would frighten the enemy sufficient to gain an edge in battle. 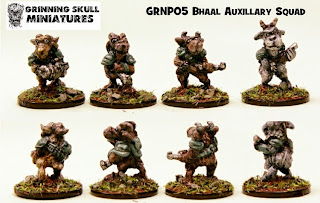 Alternative Armies presents releases in the Grinning Skull line by Will Grundy. These miniatures are single releases and a value pack too for the horned heroes of the Baahl. They are 28mm scale white metal miniatures which are great for science fiction, post apocalyptic as well as other types of wargaming with any rule system. We hope you like them as much as we do. You can see them HERE.

GRNP05 Baahl Auxillary Squad (10)
This value pack gathers together codes GRN44 to GRN47 for a total of ten miniatures randomly but evenly mixed in terms of poses. A whole squad with a 10% saving off single miniature prices.

There have been many releases for Grinning Skull in the last few weeks from more Oggum to Ogbots and Pig Ogres and Mutant Chickens and Kize Aliens and more. They are all on their own section of our website as single miniatures, value packs and whole sets. Go HERE to visit them.