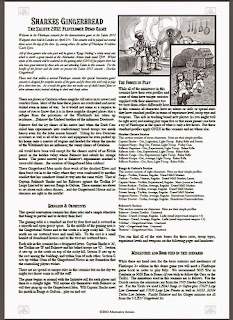 The specially written Flintloque scenario used at the Salute 2012 wargame convention is now a free file to download from The Notables Yahoo Group.  Sharkes Gingerbread is a three page packed scenario which sees our favourite Rifleorc face off against creatures baked in ovens and a baker who would see them all doomed!  Scenario, special rules and more.  Here is the introduction:

There are places in Catalucia where magicke still exists in its rawest and weirdest form. Most of the time these places are overlooked and never visited even in times of war. So it would not come as a surprise to some of you to know that it is in these magicke charged places that a refugee from the privations of the Witchlands has taken up residence….Bakerov the Undead brother of the infamous Doctorov.

Bakerov fled the icy climes of his native land when the Dark Czar called him experiments into confectionary based troops too much heresy even for the liche master himself. Taking his two Dwarven assistants as well as all of his tools and equipment he even packed up his home onto a convoy of wagons and headed for where the master of the Witchlands has no influence; the sunny climes of Catalucia.

All would have been well except for the chance arrival of an Elvish patrol in the hidden valley where Bakerov had rebuilt his strange house. The patrol arrived just as Bakerov’s experiments reached a successful climax…the creation of Gingerbread Men soldiers!

These Gingerbread Men made short work of the shocked Elves and then burst out in to the valley where they were confronted by another conflict that has somehow found its way into the same valley. That of Captain Rekhardt Sharke and his Rifleorcs against the Trolkin 3rd Lergo Line led by messers Bange & Oafson. These enemies are about to set about each others throats…and the Gingerbread House and its denizens are right in the middle!

I had a great time at the show and we played the scenario through four times across the day.  Not all of the Kyng's Shillings handed out were returned to the stand for free Flintloque items as some wargamers just wanted the coin! 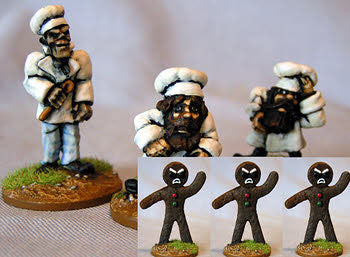 You can find the Gingerbread Men pack HERE.

There are some six hundred and fifty members of the Notables Yahoo Group and its a place where there is more than 100mb of free files, hundreds of pictures, a legacy of more than twenty thousand messages along with wargamers to talk to. I also frequent the group several times a day and I am always happy to pitch in on all conversations including items not to appear here. Its well worth joining this Yahoo Group and while you must apply to join this is just a formality and I will sign you in (you need do this only once) where you can pull up a virtual armchair and talk about our games and miniatures. Here is the link: Notables Group.