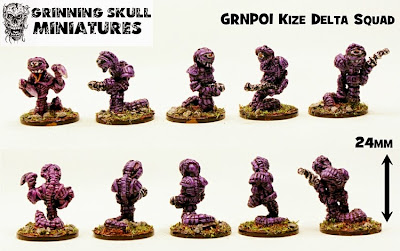 The Kize are an insidious, worm like alien race who infest hosts internally, eventually transforming them into fully fledged kize. The kize invasion begins when the larval forms are secreted into water supplies to unsuspecting worlds. Slowly, the takeover gathers momentum with each new victim falling to the infection, each time a new host developing new lavae inside them, then infecting more hosts. Eventually the DNA of the host is overwritten by the Kize, developing the characteristic single eye and distended spine becoming a tail as the legs atrophy. Once the transformation is in progress, there is no hope for the victim, as their old self is consumed by the larval creatures that are being nurtured inside their mutating bodies.

The Delta is the common form of these creatures, created from most bipedal races, and are at the bottom of the kize social ladder, subordinate to the larger Gamma and Betas, and ruled by the deadly Alpha types. Kirzors are the close combat adaptations, armed with large slashing talons. While Aerozors have leathery wings, serving as the eyes in the sky. Many more adaptations exist, from the huge Sluketh, to the vile Infestikor, a huge larval breeding factory at the heart of many an invasion. Note that these names are given names by xeno-biologists and such like, not their true names, in their own language. Such a language exists, but is a truly bizarre guttural screech that so far, no one has been able to decipher.

All Kize are able to have independent thought, but there is indeed a strong mental connection with other members of their race, and will always band together in unity when faced with any confrontation. This sixth sense means that they are able to sense through each others senses and gain advantage over their enemies. They will swarm together en masse, acting on instinct and without question in battle, making them a dangerous foe. With their worm like bodies and single glaring eye they stand about 24mm tall.

Alternative Armies presents releases from Will Grundy's fantastical miniatures line Grinning Skull.  These releases are single miniatures and a value squad pack for the alien Kize.  These white metal 28mm scale miniatures are great for science fiction and post apocalyptic wargaming with any rules system.  We hope you like them as much as we do.  You can see them HERE.

Single Miniatures and a Value Pack with a Saving.

GRNP01 Kize Delta Squad (10) 9.00GBP
This value pack gathers together codes GRN26 to GRN30 for a total of ten miniatures randomly but evenly mixed in terms of poses.  A whole squad with a 10% saving off single miniature prices.

There are more releases to come this month for Grinning Skull.  See our blog post for a list HERE.