"The Guild of Spellsmiths and the Guild of Blacksmiths do not often clank tankards of Beir but when they do great things happen. Imagine said Gumblebeard the greatest of the white wizards what we could do with an axe wielder as large as the common Troll but alas our magics will not take a physical form on the field of battle without intricate preparation. Such preparation is hard enough without some stinking Gobber trying to cave your skull in. Tamble 'Blowback' Rustmaker chief of the Guild of Blacksmiths replied to this impassioned speech without spilling a drop of golden hops. Such a huge warrior would be most welcome and we can hammer and smith our way to clothing him but there is no Dwarf in the realm so big to wear it... Sparkes or raw mind forging flew from them both and with a resounding clank of tankards they spoke in unison. Between us we can build it and bind it with magic runes. A golem will take to the field of battle. A Dwarf Runic Golem!" 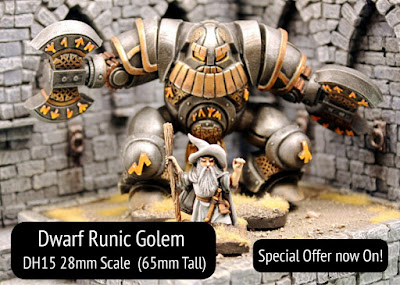 Our popular big backup muscle for 28mm Fantasy Dwarf Armies is now re-mastered and back on the website with a wee offer.  A resin kit of five pieces with a small amount of pose choice the Golem stands at 65mm tall and comes with a 50mm square base included.  Other miniatures are shown for scale and not included.  See it HERE.

The Golem featured in the expansion 'Hammer and Forge' to Song of Blades and Heroes by Ganesha Games as part of their 28mm Fantasy Range of Dwarves and much more.
Posted by Gavin Syme (GBS) at 03:02