Fantasy Warlord range 15% off this month plus July News

July is here and the summer is underway.  Alternative Armies thanks its customers for their continued support and we hope that your hobby time has given you a lot of fun and relaxation.  We like to give a little something extra and this month it is an offer upon the entire 28mm scale classic Fantasy Warlord range. Go HERE or read on for details and news. 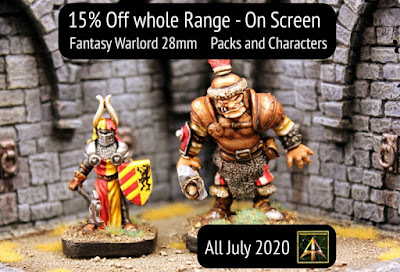 At the start of the 1990's the Fantasy Warlord range hit the shelves and we were delighted to bring it back to the world in 2017.  Great for any game system the range includes sixteen character miniatures of heroes, wizards, champions and more from Human, Orc, Goblin, Elf and Dwarf races.  There are ten packs of infantry all open handed to accept any weapon choosing from Humans, Orcs, Goblins, Dwarf and Elfs.  Adding to this are two codes of shields with many choices and five different weapon sets too.  Go HERE.

The offer of 15% off is on screen for every code and sub-code in the whole Fantasy Warlord range.  You just add to cart.  Any other discount code you have during checkout is still valid and the offer ends at 9am GMT 1st August 2020. 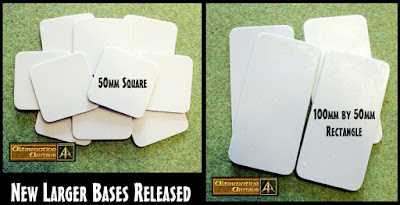 News from Alternative Armies for July 2020
While the Corvid 19 lock down is easing in the United Kingdom things are not as yet back to normal.  Our suspension of new and re-stock print titles and book releases is still in effect.  There are now nearly ten titles out of print which we will bring back once we are able. If you wish to be informed of when new and existing titles will appear please contact us on sales@alternative-armies.com and we will let you know.

This month we have re-mastered 15mm packs in the Isarus (three war elephants for the Blemye, the Selucid and Sassanids) and HOT range (Skeletons and other Undead) to show you.  There are two new sizes of bases being released suitable for large monsters or vehicles in fantasy and science fiction.  A new pack of wheels for 15mm historical and fantasy.  We have a release into the Torture Chamber range for collectors.  Two new scenic pieces for 15mm Science Fiction and a new 28mm Terrain piece adding to those ranges.  There is a brand new character pack for Flintloque following up on the 2nd Heavy Dragoons, along with a Uniformation article on him; plus a re-mastered and expanded version of the Hussars de Jeune as well.  We also have articles on painted Slaughterloo Divisions and a huge expansion to our offerings of pro-painted miniatures on the website.  Lots to look forward to and each will get its announcement.