Striding across the landscape come the Greys in their six legged suits (spiders on Zeta Reticuli are six legged..we are the odd ones out on Earth).  Towering above their subjects and enemies the speed and terror which Arachnid troops bring make them something to be respected when the death rays start a shooting! 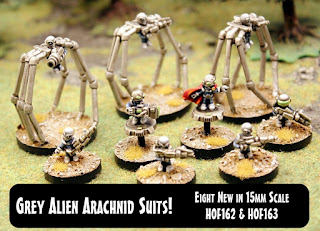 Two new packs and a special single pose choice list added to the HOF 15mm Science Fiction Range and the Grey Alien Army.  Following up on last months Lift Disc Riders and also the four new packs of infantry the Greys keep on growing.  From the mind of veteran wargamer Fred Richards in partnership with Alternative Armies.  Go HERE for the range or HERE for a narrower result of all the Grey Aliens. 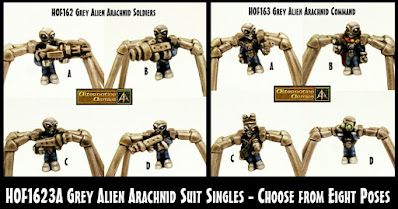 HOF1623A Grey Alien Arachnid Singles: Choose from eight different poses of Arachnid Suits using the drop down menu. In any quantity you wish. Each suit is composed of seven pieces and you can pose the legs.  When assembled it stands about 40mm tall.

These are all of our 15mm science fiction releases for this month and we are happy to report that next month there will be further new packs in the range to enjoy. 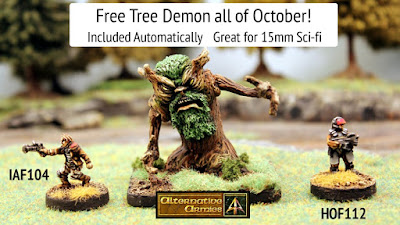 Read on our BLOG in full.  Free Tree Demon automatically included in every order shipped during October 2020.  Great for many scales and settings.