Alternative Armies expands our 15mm Renaissance range again with eight new codes. Following up on new artillery and gun crew last time we now add cavalry to our growing selection of Landsknechts (now over thirty poses).  Go HERE for the range or read on for more.  You will find most of the Early 16th Century on Page Two of the range as the range runs by time period with artillery and Ottoman Turkish at the end. 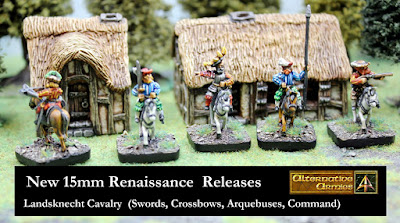 Useful in Italian Campaigns as well as across Europe in the sixteenth century we hope you enjoy these historical releases which can also be used for fantasy if you prefer an 'imagi-campaign' or such. The above image shows some of the new cavalry in front of two of our 15mm buildings (HOB1A Small Hovel and HOB1B Big Hovel).

These riders are supplied with horse MRH02 but they will fit any horse in the range and as with all other cavalry you can purchase riders on their own too. 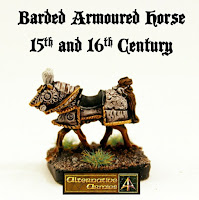 These riders will sit happily on the new MRH20 Barding Armoured Horse if you prefer to have your Landsknects a bit heavier on the table. 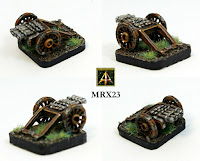 Perhaps your Landsknechts will act in guard of their own artillery.  MRX23 Organ Gun (above) which can go with any of the gun crews including MRX19 which has four Landsknecht gunners.

These are our 15mm scale historical releases for this month at Alternative Armies.