Now at Alternative Armies a pack of five poses of a brand new race on the World of Valon; the Hann. Sculpted by John Bell, he of Sengoku 15mm Japanese Fantasy fame, these fantastical creatures slot into the Frontear setting.  They are equally fine in any fantasy system or perhaps even a Steampunk Fantasy or Post Apocalyptic setting. We place them into the Wylde West period alongside Gunfighters, Bandits, Soldiers and Logann natives. Without further ado we give you Hann Townsfolk.  Go HERE or read on for more. 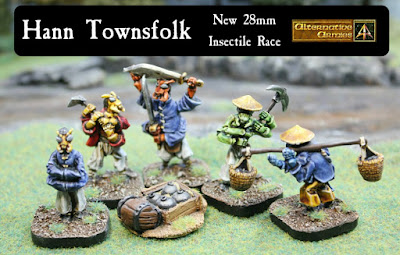 “Leaving the Mandryn owned kingdoms the underclass race known as the Hann came to Amerka, to Kitton and some even to Urop to escape tyranny.  They had great difficulty in communicating and understanding the ways of these less Wylde Magicke nations but they strove to be accepted and in time they found work and places to dwell.  In Amerka it is in the great towns of Kalifoornia and the Aridzona vastness too.  Often a law unto themselves the Chigtowns within cities like Sanfransiroc are ruled by Hann gangs. The Hann will put up with almost anything to avoid returning to the dragons of the Mandyrn.”

In the top picture you see the new Hann standing around the Case of Shotte terrain piece which is free in every shipped order this month automatically.  See that HERE. 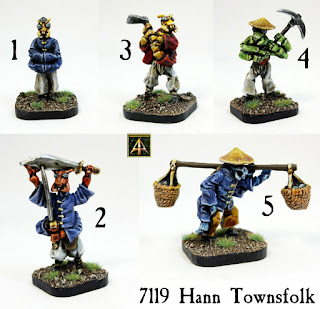 7119 Hann Townfolk. This pack contains five 28mm scale metal miniatures.  The Hann are an insectile fantasy race with an oriental theme.  Each Hann has four arms and is dressed baggy trousers and tunics.  The poses are Hann Merchant or Shopkeeper arms folder (1), Hann enforcer or Tong Executioner with swords (2), Hann railroad or manual worker with tool (3), Hann Miner with Pick (4) and Hann labourer with baskets (separate piece) (5).  You have the option of purchasing a pack or choosing single poses in any quantity from the pack all on the page.  Go HERE. 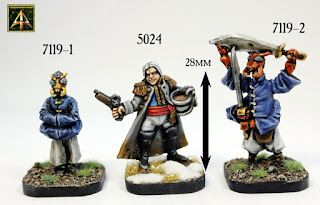 There are no rules for Hann in existence for the Frontear setting and due to the current world circumstances we have been unable to properly playtest and create a setting document for them with statistics blocks.  In the meantime we suggest referring to pages 92 to 99 of 7000 Frontear and treating the Hann as 'Dwarf' in terms of their movement rates, combat factors.  They may use any weapon open to Orc sized creatures and have no fear of black powder.  They are slower than other races of their size but stronger than Elves.  You may also ignore the combat modifier for being attacked in the side or rear in close combat due to their four arms and insectile nature.  If this new race proves popular we may make other poses such as troops. 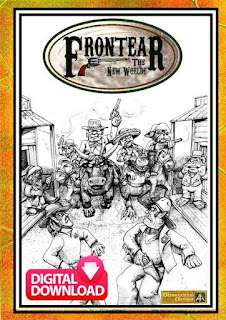 You can see all the other miniatures in the range plus the digital download of the Frontear game book on our website HERE.

This is our first new release of the month.  There are more to come.  Keep an eye on the website and our social media for tabletop fun!