Alternative Armies expands our 15mm Renaissance range again with two new codes. Our selection of artillery now includes a many multiple barrel gun and our rapidly growing selection of Landsknects (more than twenty five poses) now has a gun team too. Go HERE for the range or read on for more. Additionally you will find the artillery on Page Four of the range. 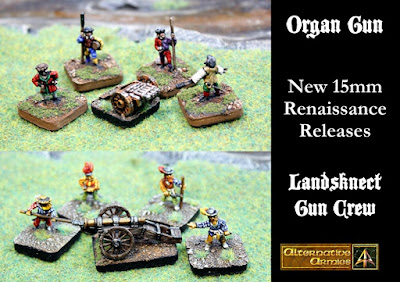 Useful in Italian Campaigns as well as across Europe in the sixteenth century we hope you enjoy these historical releases which can also be used for fantasy if you prefer an 'imagi-campaign' or such. The above image shows the new gunners with MRX1 Cannon and the new artillery piece with MRX7 Early 16th century gun crew.

MRX19 Landsknecht Early 16th Century Gun Crew
Four different Metal Miniatures from the Altuos range. These Landsknect gunners go with our range of Landsknects and any of our cannons such as MRX1, MRX2 and MRX23 Organ Gun. Individual codes are: MRX19,MRX20,MRX21 and MRX22 if you wish to ask about multiple singles. Go HERE. 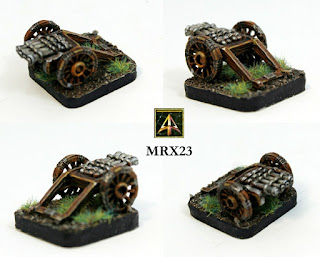 MRX23 Organ Gun
One artillery kit of 15mm Metal Miniatures from the Altuos range. Composed of organ gun on carriage and two wheels. The Ribauldequin, also known as an infernal machine or organ gun, was a late medieval gun with many small-caliber iron barrels set up parallel on a platform. In use during the 14th and on through the 16th century such as that used by the Kingdom of Aragon. It is also a rather fanciful artillery piece perhaps inspired by Leonardo da Vinci. Go HERE. 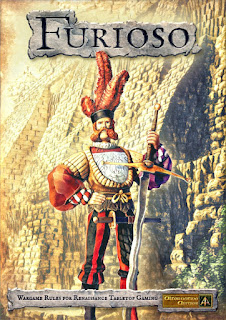 Also if you are keen on Renaissance Warfare check out the Furioso rules system with its Italian Wars expansion as well as our 15mm range which contains over three hundred different miniatures. Infantry, Cavalry, Artillery, Command plus Horses and the man of the age Leonardo da Vinci!
This is our last release of the month. Thank you for your time.
GBS
Posted by Gavin Syme (GBS) at 08:44