Steve Hazuka wrote a great set of fantasy wargaming rules which Alternative Armies published in an expanded edition way back in 2009.  The book is out of print but it is in a very affordable (we always price our digital titles at least 20% cheaper than print) downloadable format.  See it HERE. 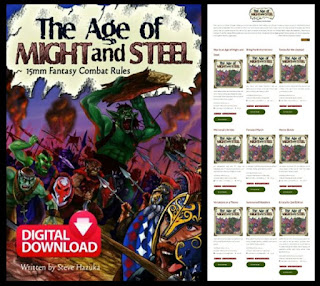 Have you ever wanted to field large fantasy armies with many blocks of infantry and cavalry with lots of monsters, artillery, heroes and magicians that looks great on the gaming table? Have you been put off by ever more complex rules and the need to spend many hours playing to get to the glory and thrill of victory? Then The Age of Might and Steel is the rules set for you!

Play a full game inside an hour with 100-200 15mm Miniatures on the table. All the action played out using 1 six sided dice (1D6). Armies built from Units made up of Stands of several miniatures. Add Generals, Monsters, Magic Users, Heroes and more to your Units. BIG Fantasy Armies easily controlled. The look of a complex battle without the headaches. Create original scenarios or use the included Points System and Army Lists. Combine Armies into Nations for even bigger games! For busy gamers who enjoy a rewardingly simple game that encourages tactics. 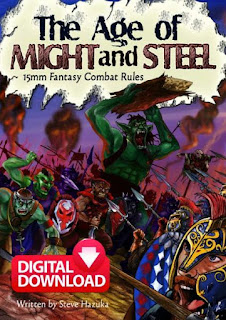 Age of Might and Steel is not a complex game rather it allows you to take your 15mm scale fantasy armies and get playing with a minimum of fuss.  In fact read what was said about playing AoMaS back in 2011 on Orcs in the Webbe HERE. You can use any miniatures such as those in the HOT Range or Tabletop Fantasy Range or even the Sengoku Japanese Fantasy Range.

Recent active interest led to Craig over at Orcs in the Webbe setting up a dedicated Age of Might and Steel (AoMaS) page where he has placed all of the free articles written by the author for the game. These have not been seen online and were in print a decade ago.  They expand the game with a lot of fun material. Go HERE for the page. Articles include an Errata for the game, using Heroes, fielding Mercenaries, the Undead and much more.  Our thanks to Craig!