The last new release of more than sixteen during this mega offer month is a big one for the World of Valon.  A whole set of new Dogmen from the ruined kingdom of Pudigrochumsberg.  This takes that army up to an all arms force of infantry (line, grenadiers), cavalry (dragoons, cuirassiers), artillery, light troops, command, personalities, limited edition and a Divisional Army Pack (DAP) saving 15% off an entire division.  Go HERE for this Ferach Empire allied nation to see everything. 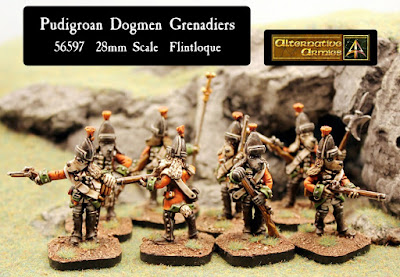 “Give us our revenge was the only request of the thirty thousand Dogmen who marched into Armorican service. Give us the chance to kill Ostarians and we will. The Emperor Mordred was only too happy to oblige them and in addition to training them in Elvish drill he armed them with his firelocks and give them his artillerie was well. There are more than a dozen regiments of Pudigroan in the field against Ostaria.” 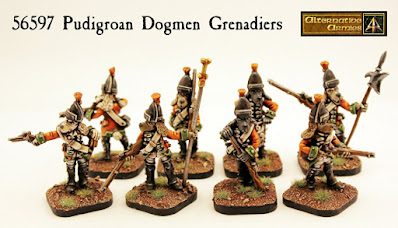 Veterans of many campaigns and extensive soldiering have made the remaining regiments of line that King Bonio possesses very effective fighters. Considered a breed apart these troops perform very well in battle.  Poses are an Officer with Pistol, Drummer, Standard Bearer with bone topped pole and musket, Sergeant with musket and spontoon.  Four different soldier poses with musket which are firing, advancing, loading and marching.  As with all World of Valon codes you get free resin cartouche bases included.  You can choose from a skirmish pack of ten, a unit of twenty (with saving included) or a trooper booster single (random trooper or ask for a pose you want in any amount).  Go HERE for these new miniatures. 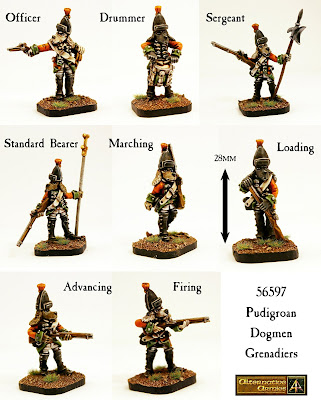 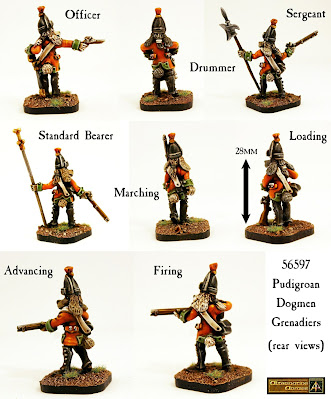 These are characterful miniatures and each could tell a story of war in Central Urop.  Above is a front and rear block view of each.

Players of Flintloque and Slaughterloo a treat for you! A free six page army booklet to download for the Dogman kingdom of Pudigrochumsberg. Background, profiles, regiments, statistics and more.  CLICK HERE to download from us.

Pudigrochumsberg features in 5028 Bier & Bones game book for Flintloque and in 5030 Slaughterloo where you can create your characters and units and get playing.

Get started in Flintloque with 5024 Escape the Dark Czar beginners set which has core rules, three scenarios, ten resin miniatures, dice and bases all for a great price. See our Begin in Flintloque page for this as well as many free scenarios and articles following General Saindoux and his survivors as they retreat from Moskova.