Four new 28mm Catfolk now in the growing Kitton range at Alternative Armies.  We continue to make releases for the range though slower than expected for 2020 for reasons you will know of (as with happened with the Erin Project) but this new pack takes us up to thirty seven poses plus a giant oni all sculpted by Sam Croes out leader designer.  There are more coming in 2021 and we thank you for your kind words on this new expansion to the World of Valon.  We have Samurai, Ashigaru, Ronin and Villagers.  Each pack can be had on page as single poses too.  Go HERE for the range. 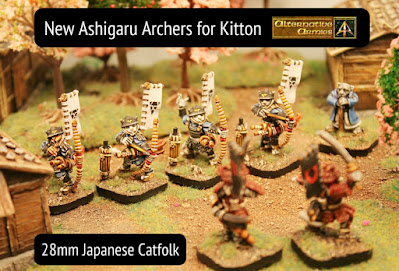 A unique array of 28mm scale fantasy Japanese miniatures in the same vein as our Todoroni, Ratmen, Rabbitmen and others though these Kitoka live in a land of warring Diamyo and vicious monsters cut off from the rest of Valon.  Welcome to the islands of Kitton! 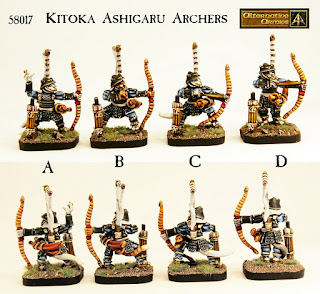 58017 Kitoka Ashigaru Bows. This pack contains four different 28mm scale metal Kitoka Catmen miniatures of an average height of 23mm. The Ashigaru are the foot soldiers of the warlords of Kitton and are armoured carrying a Bow and Quiver of Arrows. They are soldiers for your forces. Each miniature comes with a separate Sword Bundle, Arrow Quiver and Back Banner. 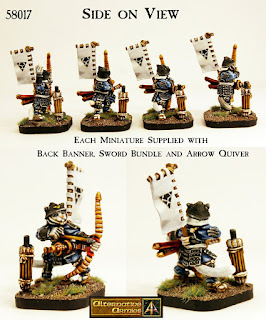 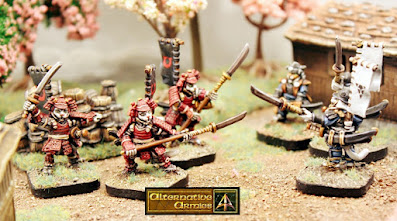 While no game rules exist for the range there are plans to field test a version of the Flintloque 3rd edition engine with a Kitton setting.  This project is currently on hold but will resume next year. 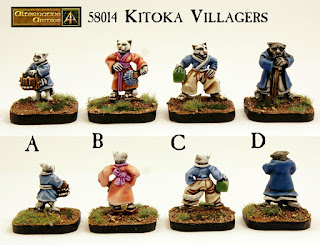 Almost all of the Kitoka are warriors but as the range expands more townsfolk and villagers, as above, as well as yokai (monsters) will make an appearance. 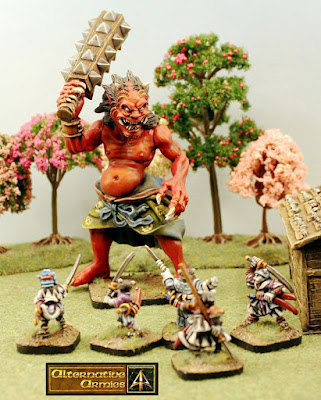 One of the largest models in Alternative Armies array of thousands of miniatures.  The Kitoka face Oni all the time as they fight the strange monsters and also each other. But, among the Oni there is one whose name strikes fear into the bravest of Catfolk. A giant called Jigoku!  The model is over 100mm tall and carries a Kanabo Spiked Club (90mm long from end to end).  See him in the range HERE.